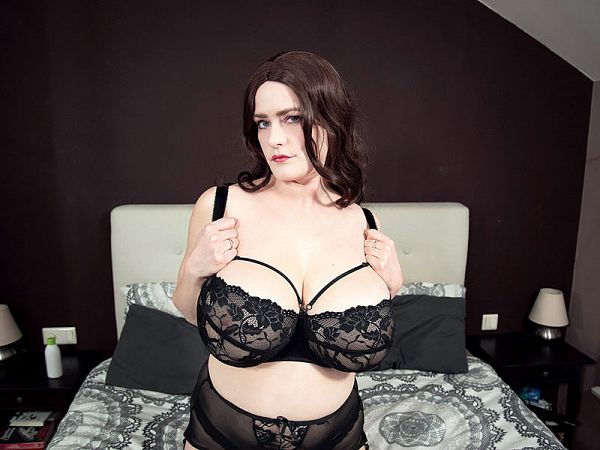 SCORELAND is happy to bring you the debut of Dutch big-bust model Cleo direct from her home in the Netherlands during the stay-at-home situation that caused us to temporarily suspend our normal studio production in the USA and Europe. There’s no government stimulus bailout for us like for other companies, so thinking outside the bra is essential to feeding your need to see the busty girls you crave and keeping SCORELAND #1 in big-boobs.

Bigger than your head, Cleo’s huge, natural breasts need a 34K-cup bra to keep her treasure chest supported. Her social media name “Messy Cleo” came about because she began modeling in 2018 as a “wet & messy” girl. In this kinky practice, a fetish also called sploshing, models cover their bodies with syrup, cakes, pies, custard and other substances, predominantly foodstuff. Cleo also enjoys a bit of rope bondage.

Cleo found that big boob lovers were also attracted to her (and without the wet and messy part) so she began to also focus on her heavy, hanging tits. She’s a perfect fit for SCORELAND, especially for the curve-loving Voluptuous fans who adore the super-naturals, and Cleo is definitely a super-natural.

“I am a bit of a shy girl, but if you get to know me, then you’ll see that I am a fun-loving girl,” Cleo writes on her website. “I have a wacky, naughty and kinky side. I am also a real geeky girl who loves games, Dungeons & Dragons and role-playing.”

Cleo shows us how much she enjoys breast-play–swinging, dangling, shaking and jiggle and nipple licking–in this video shot in her mirrored bedroom. Her nipples are very pointy and really stand out against her pale skin. She’ll make you boob-drunk.

See More of Cleo at SCORELAND.COM!