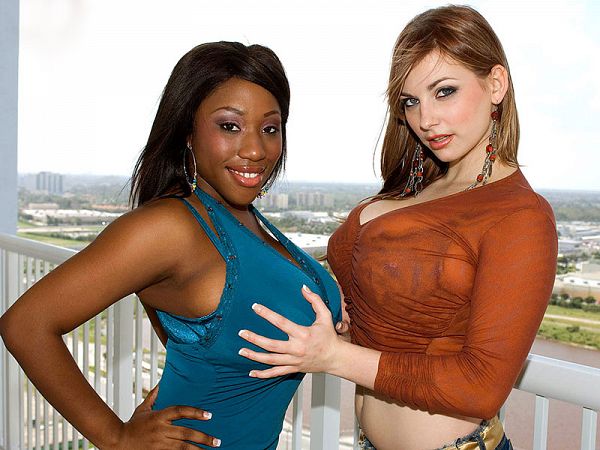 They don’t come any more “busty-chick-next-door” than Janet Jade and Christy Marks. In her corner, breaking the measuring tape at 38DDD, standing 5’2″ and weighing 138 squeezable pounds, Janet Jade from Detroit.

Her fellow handmaiden Christy Marks, 36H, 5’4″ and 134 pounds is from Pennsylvania. They would have made a great team running a massage parlor.

“A lot of guys like my ass, but most guys mostly pay attention to my boobs,” Janet said. Christy is entranced by Janet’s sweater-bumps. “I don’t know whose titties are bigger, but I like yours better. I think mine might be wider and yours are bigger. But I think they look really nice together.”

They walk towards the camera wearing low-cut tops that display their cleavage mounds like a frame showcasing a painting. Christy and Janet play with their tits, helping each other remove their boobs from their tops. They squeeze, they rub, they jiggle, they shake.

They coat their rich, soft tits with baby oil and strip down to their panties. Soon their hands will be kneading, rubbing, yanking and stroking. Their breasts will engulf the boner, squeezing, jerking and massaging. The girls purr, hum, whisper and murmur in jack-chat, their sweet voices bringing a sonic eroticism to the action until their target explodes.