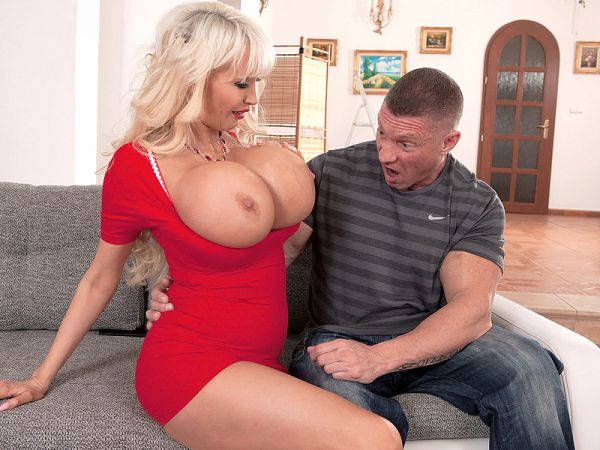 Here we have every electrician’s fantasy as well as the goal of every guy who loves beautiful, slim blondes with big, high-riding tits. Mr. Electric has been called to Sandra Star‘s place to repair a light fixture. She’s wearing a tight, cleavage-baring dress that shows off her bod and a bra that makes her boobs stick straight out. Shocking! While he’s checking to see what the problem is, Sandra is checking him out.

SCORE covergirl Sandra has him sit next to her on the couch and when he tries to present her with the bill, he gets an eyeful of her jutting, jolting boobs. His dad steered him right when he told him to learn a trade. Sandra lowers the top of her dress and her bra, revealing her naked knockers, and offers him something nice to suckle. He takes her up on her overture and before long, Sandra is dangling over his lap, sucking and licking his shaft. The sparks are really flying.

Sandra lies back on the couch and lifts her high-heeled feet up so her new friend can pull off her panties, spread her pussy lips and lick the pink center. Sandra’s moans, her crazy-sexy body and her gyrations of pleasure act like an aphrodisiac, frying his circuits. He plugs his cable into her tight socket and they blow their fuses.