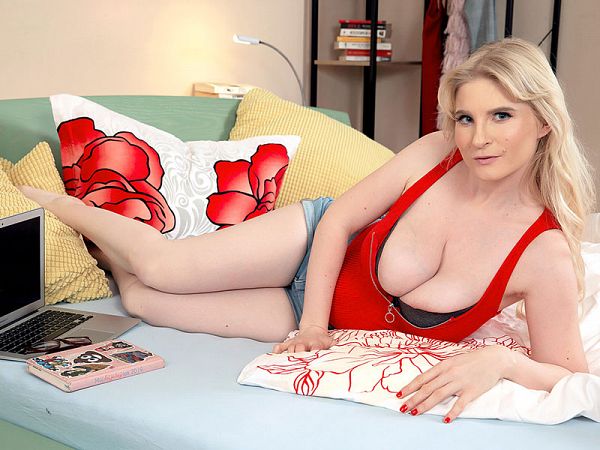 Germany is famous for many things. Engineering, cameras, cars, beer. The list is lengthy. And also famous in Germany is Casey Deluxe, pretty Dresden doll.

Casey started out posing in swimsuits and lingerie. She had gone topless by the time she connected with one of our roving photographers. She’s expanded her horizons considerably since then. Back at the beginning, she never guessed she’d stick a butt plug in her booty on-camera or ask her fans to send photos of themselves jacking over photos. She’s been written up in German magazines and newspapers and even a few newspapers in the UK.

Wrapping up some work on her laptop in her bedroom, and wearing comfy, at-home clothing, Casey turns her attention to the photographer who is her regular SCORE shooter. It’s time to shake, swing and suck those big, floppy tits and give her shaved pussy a rubdown. It’s not just a hobby or a job for Casey. It’s a way of life.