The Fake Doctor & The Busty Brunette 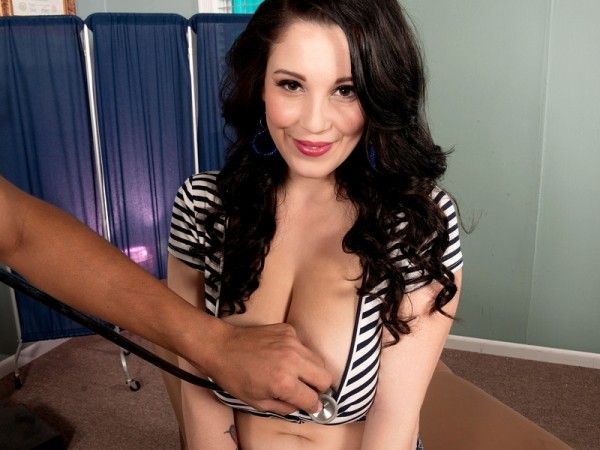 Noelle goes to the doctor to get checked out. She didn’t check his qualifications first but he sure is going to check out Noelle’s qualifications. Because he’s a fake doctor. He’s not even wearing a shirt or shoes, just pants. Who is this? Doctor Hillbilly?

He asks her what the problem is. Noelle says she’s hot. Her temperature’s rising. That sounds normal since Noelle IS hot. The brunette from Kentucky can make any dude’s temperature, and cock, rise. Look at that cleavage staring back at you. It could make any doctor want to switch to gynecology. Wow, is she a cutie!

The fake doctor doesn’t know how to use a stethoscope so he asks Noelle to lower her low-cut top. His breast examination gets her excited so she reaches out for his junk. “Got a nice tongue depressor?” she asks. She pulls his big cock out of his fly and gives him a slow and sexy blow job.

He gets on his own table so she can massage his tool between her tits. He can’t wait to sink his sausage into Noelle’s tight, young pussy–so pink and fresh–and fuck it good. The fact that he’s a fake doctor doesn’t bother Noelle at all because he doesn’t have a fake cock.

And that’s a good thing.