The Drill At Boob Camp 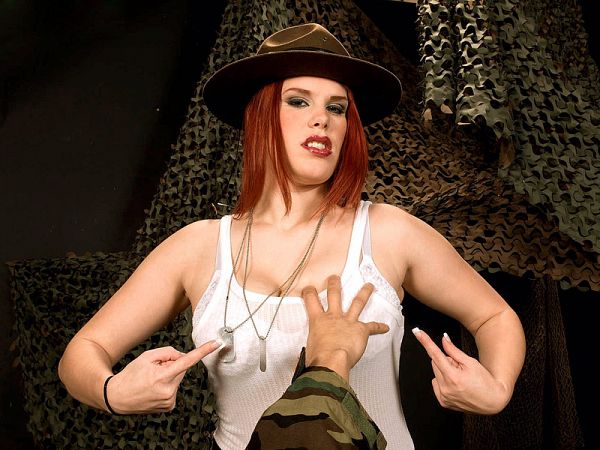 Curvy drill sergeant Jolie Rain sees a big dick and she instantly knows that it must drill her. She hops right to it and pumps up and down on it like she is doing push-ups. What army chick would be satisfied unless she achieved victory? Jolie wins this battle when she gets this enlisted man’s honorable discharge all over her big, natural tits.

Jolie herself served in the military and spent time in Iraq. She loves guns and cars.

“I’ve always had a thing for really muscular guys and bald guys. There’s something really empowering about having that uniform. I really like guys who have authority and bark orders. I like military men. They have to have the type of confidence to accomplish a goal and do things with their lives. They’re not intimidated. There’s something about having a strong, protective male around that does it for me.”

Jolie can be a dirty, nasty girl in bed, drooling over a guy’s cock and perspiring as she fucks hard and fast. She has a kinky, pervy side and is into weird bondage and fetish activities. So her all-American looks is not all that it appears to be.

“I’m really bad in the bedroom. I like pulling hair and biting…talking really, really dirty. I’m kind of a submissive. I’ve done bondage and have done it quite a bit. But I also like good, hard sex. It’s so much fun. I don’t typically do one-night stands, but there have been times where it’s just been, ‘Okay, I can’t pass that up!'”