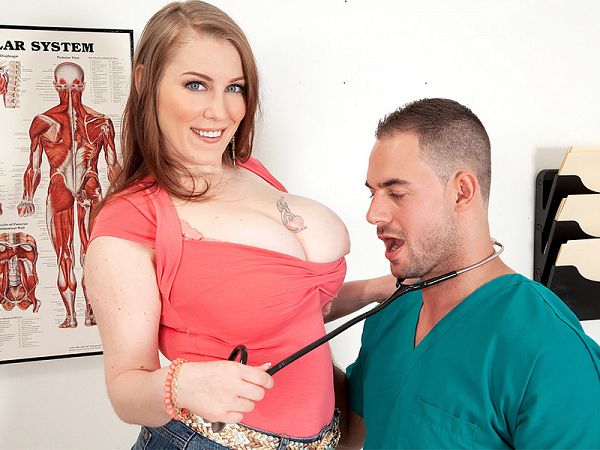 Desiree is visiting a new doctor because her knockers have unexpectedly grown larger recently and she’s feeling some tightness in her chest. The medic tells her to remove her top so he can give her a boob exam.

Desiree gets off the exam table to remove her tight top. Her miniskirt rides up when she does. The doc is all eyes. Top off, her overflowing tits spill over her 32DDD bra like a river overflowing a dam.

The reason Desiree feels tightness around her chest is obvious. That bra is too small for her, something that’s common because many women don’t buy bras of the proper size. However, Desiree’s mounded, rounded tits look great in her bra. They look pretty good and healthy to the doctor.

He suggests that he weigh Desiree’s tits. She looks around for a scale. There’s none. He tells Desiree that he can weigh them with his hands. That sounds like a very scientific way to weigh tits. “Nice and heavy, eh?” he says while jiggling them. He has Desiree turn around so he can measure them from the back. Yes, very scientific measuring here. “Yes, very healthy,” he repeats as he kneads them like dough. He has the redhead shake them and bounce up and down as he continues to check their “health.” Is this dude a real doctor?

Doctor Mirko tells her to sit down again, to open her mouth, stick out her tongue and say “Aaah.” He sticks two fingers in her mouth. It’s good to see the latest medical breakthroughs being used to ensure Desiree’s wellness. This will be a very detailed exam. Not every doctor cares enough to tell his shapely female patients to spit on his dick. Desiree will be getting a heavy cream pie later at no extra charge. Insurance won’t cover it so he’s taking it off his bill because he’s a doctor who cares.

See More of Desiree at SCORELAND.COM!