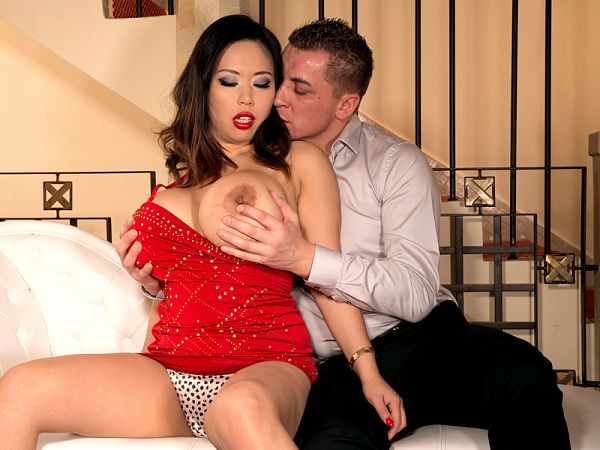 Her name may be Tigerr Benson but guys who see her are the ones who turn into animals.

Steve gets rough with Tigerr in this carnal coupling. He pulls her hair while he fucks her from behind in her pussy and ass. He rams into Tigerr like a bull. He pumps Tigerr’s cleavage hard and fast, and vigorously finger-bangs her pussy. This is fucking of the intense kind. Tigerr’s cries fill the room as they go at it.

This is the Tigerr effect. Her beautiful body, face and big boobs push her sex partners over the edge. But it’s okay. Tigerr likes rough sex and all kinds of kink play including bondage and discipline.

Having bigger boobs has upped Tigerr’s cachet. “Absolutely,” Tigerr said. “Actually I was so surprised that guys are much hotter for me after my second boob job. I like variation in the way a man actually treats my tits. I’m a natural tease and there are times when I like to be in control of a guy. I also get very excited and tingly when I feel the full force of an Alpha male who takes control of me. When it’s passionate, I like to be treated roughly.”

Naturally Tigerr likes to make it in public if she can. “Lots of quickies. I like hot, passionate sex. In a back alley doing doggie. I love sex in cars, taxis and any kind of vehicle. I have a dirty mind.”

And, like any cat, Tigerr laps up Steve’s cream.

We talked to Tigerr about this scene.

SCORELAND: Steve seems lovey-dovey in this scene and enamored with you. Do you generally enjoy a lot of kissing and neck-nibbling beforehand?

Tigerr: He was really nice. Yes I can’t help being into a scene. I think you need a balance between getting into the scene and making sure you are still professional. This is what I’m trying to teach my maiko (Japanese for apprentice) at the moment.

Tigerr: I like both rough and sensual. I think a lot of guys just remember my early scenes which were quite rough! I do prefer a man to be in control.

Tigerr: This is just the way I am. I don’t really “perform.” I don’t think it’s much of a skill, it’s just what I like to do. I like sucking and ball-licking a LOT!