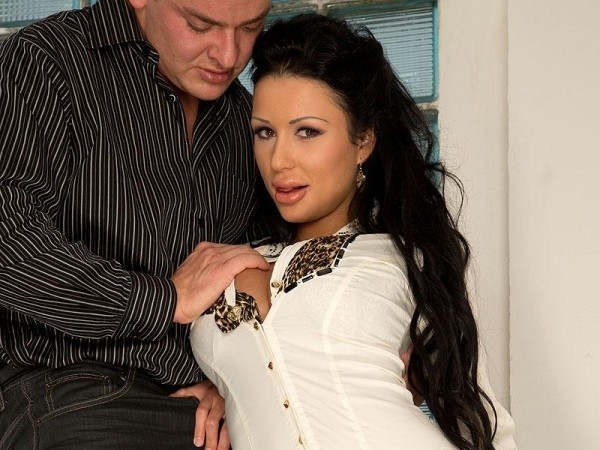 Slinky, sexy and stacked SCORE star Patty Michova and Jay cross paths in the stairwell. Jay is heading up the stairs to his desk and Patty is on her way out of the building. They stop and greet each other warmly.

Jay eyes Patty up and down like a wolf checking out a lamb. Patty knows that look very well. She checks out Jay the same way and eyes his junk. Jay needs to rush but Patty is hot and needs a fire hose to cool her down. She touches Jay’s package and wants him to attend to her needs.

Patty touches her big boobs and looks at Jay with an open invitation in her eyes. Jay keeps glancing up the staircase in case someone catches them. Patty doesn’t care if anyone sees them. Jay turns Patty around and starts to unbutton her tight blouse. Her big tits are slipping out of her brassiere.

Patty is a few steps lower than Jay. She rubs his bulge. Jay drops his pants so Patty can play with his dick. The anticipation drives Jay into a frenzy. Patty takes Jay’s cock and sandwiches it between her large hooters so she can titty-bang him. It’s game on!