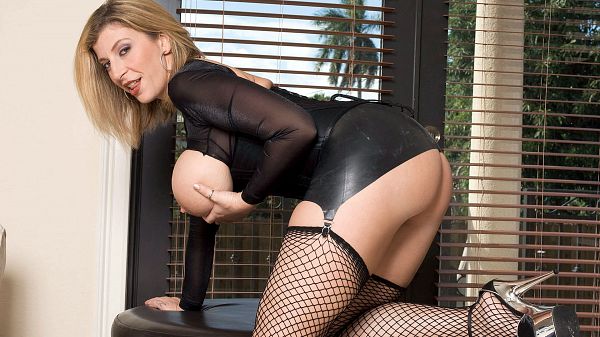 “I was working four jobs and going to college…University of Cincinnati,” Sara Jay told us. “I was a customer-service phone person. I was also a waitress at a spaghetti restaurant, and I was a coat-check girl at a nightclub, and I also sold Avon. I was an Avon Lady! I was working 96 hours a week and taking 14 credit hours at school, and I didn’t really care about my body, so when I went to clubs with this guy, I got to try wearing new stuff, and I liked it. Guys would check me out, and I liked that, too.”

Even with all of those jobs, Sara Jay still hadn’t found her calling.

My friend said, “You’re working 90 hours a week, you’re going to school, you’re killing yourself. You’re never going to make as much money as you want.” So I started dancing. I stayed in school for a little while, then I realized I hated it. I was doing really good in school, but I really liked dancing and modeling. I had shot for a couple of photographers, but nothing serious. I moved out to Vegas, I was dancing out there, and it was kind of a joke when I moved to Vegas. I said, ‘I’m going to move out to Vegas, dance and become a porn star.’ And everybody was like, ‘Ha-ha-ha, that’s so funny!’

“But that’s exactly what I did. It was a blow-job scene, and I really like giving head, as we all know. The company came out to Vegas to shoot, and they shot in an old hotel room. It was all retro, but the guy, it was his second movie, so he was nervous, and the scene took a long time, like two and a half hours, and I was blowing him most of the time. But I really liked it.”

So that’s how it all began.