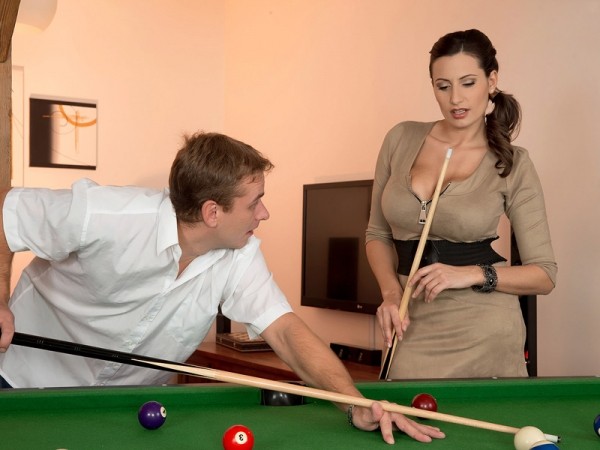 Sensual Jane has a rack that won’t stop. She has great skills with balls and sticks. Maybe not on the pool table but it’s suspected that Jane is letting Thomas help her so he’ll be behind her and she can wiggle her ass against his junk. Whatever the reason, Jane is having a good time and having a giggle, and that’s what counts. She is about to perform her own rack attack on him by distracting him so he scratches. And you know what Jane’s weapons of mass distraction are. No one can beat Jane at this game, not even a modern-day Minnesota Fats.

Jane is usually on the serious side. This time, she’s in a laughing mood. Thomas’ attempts to correct her pool strokes are not working and that cracks her up. She suggests giving up the game. Thomas doesn’t disagree. He’s got Jane’s rack on the brain. Feeling-up Jane’s big, natural boobs and slim, curvy body is in his game plan. Fortunately for Thomas, Jane is not going to stick him behind the eight ball and leave him with his cue in his hands. She’s hot for a stick-man and the green felt looks comfortable.

Somehow Jane’s tight dress slips off from Thomas hugging her and squeezing her tits from behind. She climbs onto the table, and when she spreads her legs open, her absence of panties is a sign that she was ready for action before he was. Thomas buries his face between Jane’s legs and tongue-bangs her pink, shaved slit. As her body tingles from his lip service, Jane squeezes and rubs her boobs, now pulled out of her bra.

One good turn deserves another. Jane takes Thomas’ schlong out of his pants and gives him mouth-to-cock resuscitation. They get on the table so Jane can bury his cock between her knockers and blow him at the same time. Looking at you in a P.O.V. moment, Jane takes both tits in her hands and runs them up and down the dick like a massager.

Now it’s time to slide one into the side pocket. Jane, still in her garters, stockings and skyscraper pumps, gets on her side so Thomas can run his shaft into the rack. Everyone wins at this game.