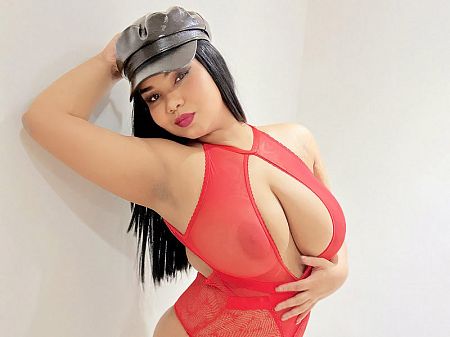 Naty says hi, introduces herself and tells us she’s in Colombia, one of our favorite nations for obvious reasons. Colombia is a country almost entirely populated by attractive, sexy, big-busted girls and they like to show what they’ve got. Naty wants to show us her very curvy and busty body and it’s our great pleasure to introduce her to SCORELAND members.

Naty striptease-dances and reveals her majestic sugar mountains that are barely concealed under her sheer red one-piece. She truly does have a majestic pair capped by large areolae.

Naty undulates out of her short skirt, sits down and takes her huge breasts out so she can shake and jiggle them. Self-sucking her nipples comes easy to Naty. She stands up to dance some more, spank her bootylicious booty and bounce her mindblowing boobs.

See More of Naty at SCORELAND.COM!