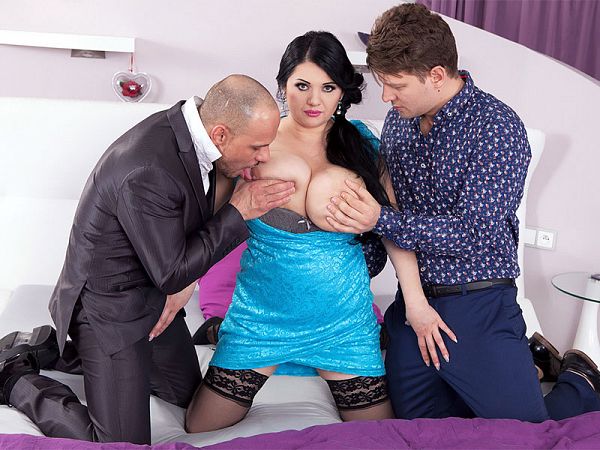 While she waits in bed for her duo to arrive, Natasha takes her unbelievably huge, natural breasts out of her dress. The dudes show up ready for the heat with this sexy Amazon. She reaches for their cocks, jerking and sucking each one.

Natasha undresses and gets on her back so Michael can fuck her tits and George can give her dick to suck. She sucks on the head of Michael’s cock wedged in her cleavage, making popping sounds.

While George feeds Natasha cock and fucks her tits, Michael slips his boner into Natasha’s hot pussy and pounds her hard and fast. They swap sides so Natasha on-top can bounce on George’s pole while she fills her throat with Michael’s meat.

As the trio pump, hump and grind in different positions, Natasha shakes and jiggles her heavy boobs. Natasha’s powerful sex drive and skills get her two studs erupting like volcanoes.