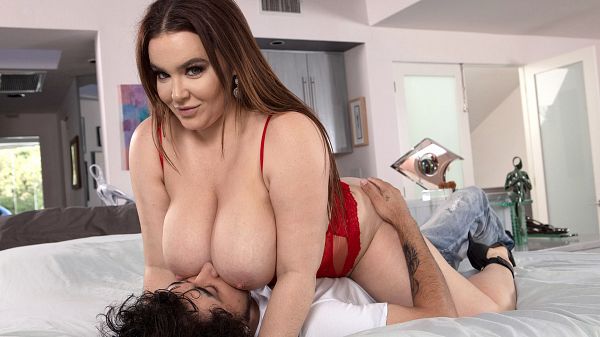 Prepare for drooling cock sucking, big tit fucking and pussy pounding the Natasha Nice way. She’s a total dime piece, a tigress in bed and a star at dirty fuck talk and moaning.

Natasha did say she would be back at SCORELAND for a dick-down and asked if we are ready to see her big tits bouncing fast and furiously. She summons Rico over to the bed and gets on top of him, smashing him in the face with her tits and grinding on his junk.

Rico squeezes and rubs Natasha’s breasts as she hovers over him. Unzipping him, Natasha whips his pants off so she can jerk and suck his cock and lick his balls. Sitting on his cock in a reverse cowgirl position, Natasha bounces on his pole like he’s a human trampoline.

Natasha’s tits swing wildly, slapping loudly against her chest. She slaps her bouncing boobs hard during this fuck position and rubs her clit. Natasha takes a break only to suck Rico’s shaft some more, jerking and spitting on it and licking and sucking his nuts. She lets him know she wants to get pounded some more, this time from behind. Natasha Nice is a beautiful bombshell fully loaded with sex appeal. We look forward to more. She’s got the power.