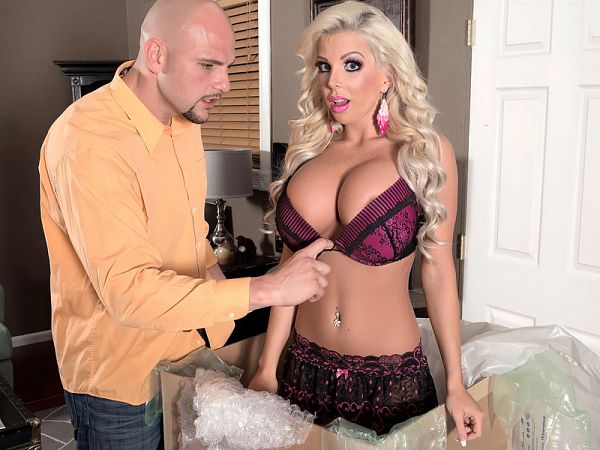 Female sex-bots may be taking over. More and more of them are being produced. Even Korina Kova is having one made in her likeness by a company in Texas. Will they be taking over for real women?

Who’s that knock-knock-knocking on JMac’s door? It’s a courier with a big box marked “Handle with care.” It’s a mystery. Who sent it? Was it sent by accident to the wrong address? What’s in it? JMac lifts off the top half and is surprised at what he sees, and he is rarely surprised.

It’s not what’s in the box. It’s who is in the box. It’s the Savannah Stevens sex-droid, life-sized to the minutest detail and made out of the finest, most realistic and flesh-like material science has created. Big, soft, jutting tits. A feels-real vagina and butthole. A beautiful doll face, an ass crafted for male hands to cup and perfect legs. A womanoid even dressed in the tiniest stripper-wear to flaunt her hot body in.

JMac examines this modern marvel of science and thinks of the things he can do with this fem-bot. He touches it and feels the synthetic skin that’s as smooth as a girl’s skin. Does it, or rather “she,” actually work or is it just like a waxwork figure? He sees a tag on its back. “Pull here to activate.” With a tug, it, or rather “she” shudders, a beeping sound is heard and she takes a deep breath. Her tits thrust out and she awakens with a smile, her hands slowly running down her slim, stacked torso. She lives!

JMac touches a boob encased in its bra cup. “What are you?” he asks. “I feel so much better now,” says Savannah-bot. JMac can’t wait to try her and test out her realistic mouth and pussy. Whoever programmed this sex doll in sucking and fucking knew his code work. And once the test bang is over, there’s another important question: Does Savannah-bot know how to make coffee?