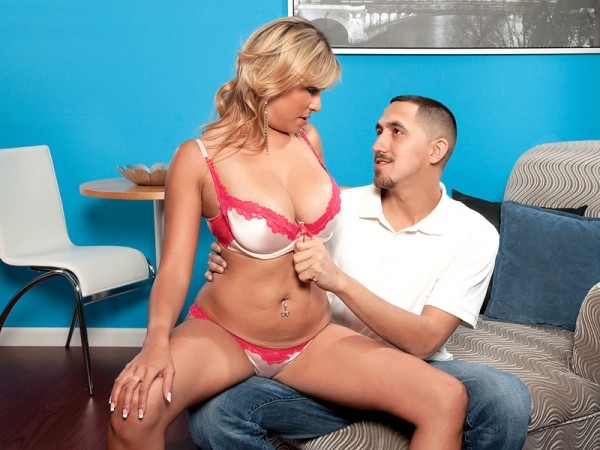 Kitana Flores is a South Beach lingerie and bikini model. She is known as the “Latin Barbie of South Beach” and drives male beachgoers insane with her hot body. You may have originally seen Kitana in a SCORELAND BLOG video.

When she first began modeling, Kitana decided not to keep SCORE Men waiting for too long to see her jump on the pole. She drives in the fast lane and she fucks in the fast lane. But first, before she meets Dr. Wang and opens her lovely mouth for his tongue depressor, Kitana wants to put on a little show, a bra and panties modeling session.

The lucky bastard Largo gives her pointers a licking after she grinds down on his lap and gives him an ass dance. She unzips his pants and pulls them down for a world-class, sloppy blowjob–licking, sucking and kissing every inch while looking into the camera. Kitana suctions down to the root of his cock. She gets on her back to get her tits screwed, goes back to sucking, then more tit-fucking, then more eating cock while she spreads her pink taco open for the camera. She slides down his pole in a reverse cowgirl position and then turns around into cowgirl, looking at the camera with an “I wish this were your dick” expression.