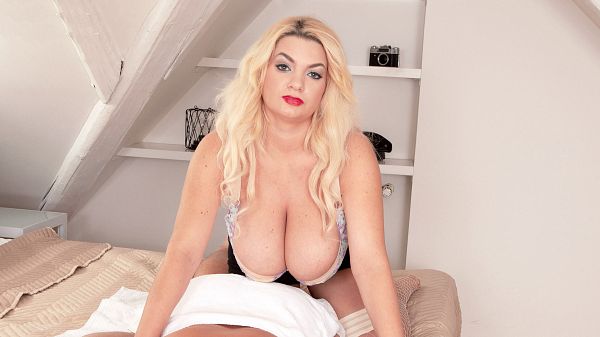 You know you’re in for a great time when the masseuse’s name is Kitty Cute.

Tom is tense and stiff, as you would be if Kitty was going to give you a rubdown. Her soothing, soft hands will provide relief and reduce the swelling that occurred the second Tom saw her. The sight of Kitty makes Tom a happy man. Those gigantic boobs are nature’s gifts to mankind.

Kitty and Tom make some small talk while she massages his arm. She takes off her top, leaving her bra on, and continues to massage him. Not able to control himself, Tom reaches out to feel Kitty’s breasts.

Shucking off her bra, Kitty anoints her huge tits with a bowl of oil, puts some oil on his cock and rubs her boobs all over his dick. She works Tom’s cock over with her hands and titty-fucks him some more.