Kim Velez Braces For Big Tit Fun In The Country

Kim Velez Braces For Big Tit Fun In The Country 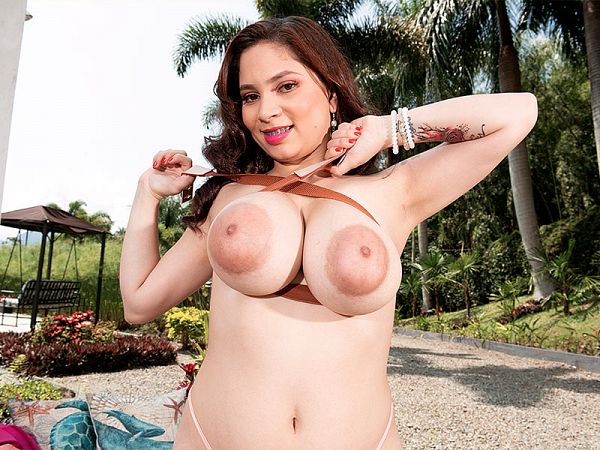 When SCORE magazine editor Dave first saw Kim Velez of Colombia, he blogged, “If you’re like me, your eyes immediately went to her braces. We’ve had very few busty babes with braces. Chloe Rose, Valory Irene and Roxi Red are the only other girls who come to mind. Of course, because we normally associate braces with teenage girls, they usually make a girl seem younger than she is, and that young ‘n’ stacked button is a hot one for a lot of us, me included.”

In fact, Kim has a lot of hot buttons. Her innocent-looking, pretty face. Her big eyes. Her large, dark areolae. From the tops of her toes to the top of her head, every body part is a hot button.

Kim comes out of the house in a tight skirt and white, low-cut top over a bra that creates major boobage and major distraction. She says she doesn’t dress like this in public.

A few minutes later, Kim removes her top and begins bouncing her tits in her bra. She bounces them using her hands and without her hands. They begin to rise up and out of her bra. Our photographer switches to slow motion to capture the rise and fall of Kim’s lovely tetas. She sucks on one of her boobs, leaving a red lipstick circle.