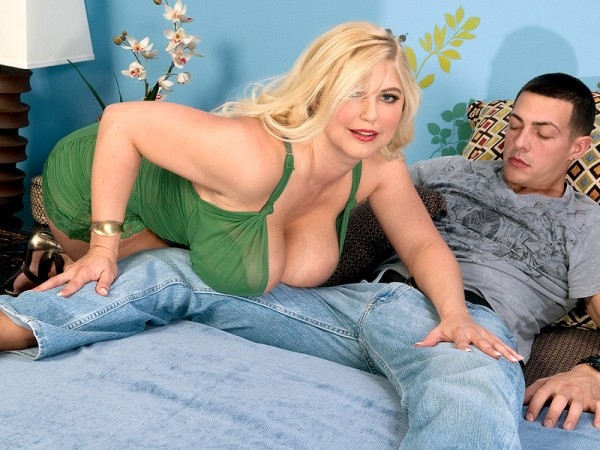 An immediate smash hit with SCORE Men, Kelly Christiansen is a rare kind of SCORE Girl, the huge-boobed beautiful wife of a magazine reader, website member and DVD viewer. Now, that’s sexual liberation of the busty kind. It’s as if posing and fucking on camera has hyper-charged her sex drive and transformed her.

“I think I said that was one of the reasons I got into this–that I wanted to boost my confidence,” Kelly said as she relaxed in the models’ dressing room. “It worked! Before I walked into the studio the first time, I really, honestly did not think I could pose, and coming in and having such a good time and seeing the magazines, definitely, I couldn’t believe it. It was great. The thing is, I’d never had sex on-camera before and watched myself. My husband likes watching me with other guys and he likes the idea that his wife is a star. We were watching one of my DVDs at home and got all hot and heavy and into it, and he was like, ‘Wait, let me rewind!’ We laid there and had sex while I was having sex. It was surreal. Totally different.”

Kelly decides to treat John to a seductive, erotic, exotic dance before they rumble. Her heavy titties, with their excitingly large areolae, are edging over her tight, sheer green slip in a very pleasing way as she gyrates, grinds and teases him by the bed. Kelly’s dancing doesn’t go on for too long. She’s too eager for one-on-one action. Hovering over him and with tits dangling in his face so he can stick her pretty nipples in his mouth, Kelly sticks her hand down his pants to feel his junk, then pulls it out and lowers her head to suck. You could never tire of seeing Kelly give head. She loves to make that slurping, sucking sound! There’s great tit-fucking action next.