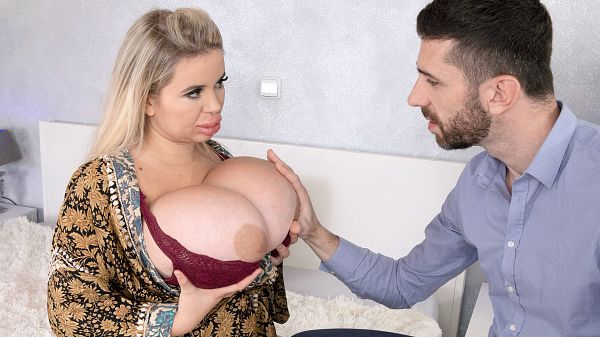 Jessy Bunny has reached another milestone in her ongoing quest for ultimate bimbofication. For the statisticians of the big-tit world, Jessy’s breasts are now at a staggering 3000cc’s. Inspired by many of the classic SCORE Girls, Jessy’s major role model is Chelsea Charms. “Her whole body proportion is like a goal for me,” Jessy told us.

Jessy is eager to show off her massive tits to Mark Dozer. She teases him for a bit but he can’t wait to feel her giant globes in his hands and put a lip-lock on her nipples. Jessy offers her boobs to him, ready to get a cock between them. She eagerly gives Dozer a worshipful blow job and lies back to get her tits fucked. Jessy spreads her pussy and ass, ready to be filled. When Jessy has sex, she is all-in.

SCORELAND: Jessy, what gives you your most powerful orgasm?

Jessy Bunny: When someone is really dominant. For example, when he slaps my boobs and tells me things like what a nasty girl I am. I turn myself into a total fuck doll, made for fucking, sucking and pleasure. Also, when a hot girl with big enhanced lips is licking me.

SCORELAND: What should your partner, male or female, do to your boobs when you’re in bed?

Jessy Bunny: Use them. They are fun bags. They are made for it. Use them.