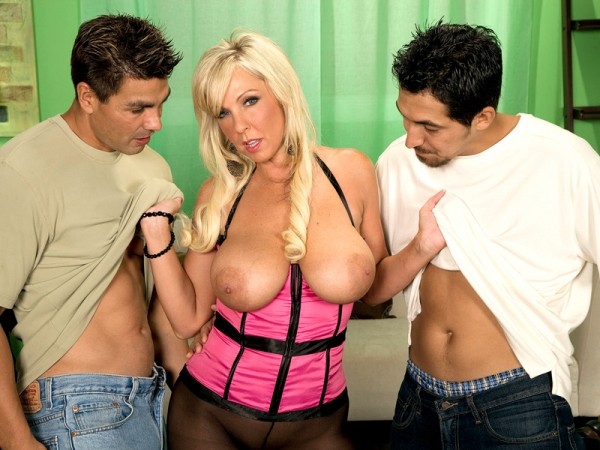 Originally, Naughty Alysha did it all for fun as a dirty, nasty hobby. Then it became a homegrown career as her cult popularity grew. There’s one thing that married-with-children, Alysha doesn’t do. Ass-fucking…with one exception. She will let her second husband–the one she fucked for the Naughty Neighbors camera years back–fill her anus. Other than that, it could be said that Alysha is a sexually liberated woman.

Alysha takes on two veteran stunt-dicks, Mr. Largo and Sergio. They get comfy on the couch and the two guys suck on her tits, one to each man. Alysha wants cocks in her face so they drop their pants and she goes for the double blow and hand job.

Sergio eats Alysha’s cunt while she blows Largo. Now to the fucking. Mr. Largo provides the first log for Alysha’s pussy. He lies back and she sits on it while sucking Sergio. This is just for starters. They use Alysha’s body in as many different positions as the three of them can think of. Alysha is talented at taking big facials and cum-eating.

See More of Alysha at SCOREVIDEOS.COM!