Fun In The Sun For Annabelle Rogers

Fun In The Sun For Annabelle Rogers 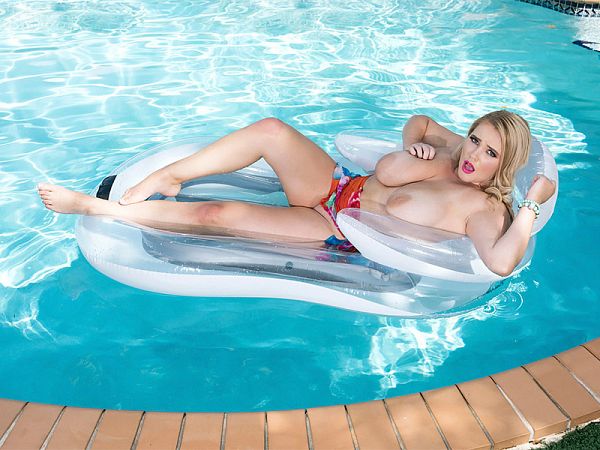 When in South Florida, there’s gotta be time for some sun and pool play. But not too much sun for the more fair-skinned beauties like Annabelle Rogers. Annabelle dances in her bikini and shakes ’em up, some of the big tits-a-bouncing motion in awesome slo-mo. Then it’s off to float away. Annabelle shows how she can balance on a float and finger her pussy at the same time. She’s a natural voluptuous mermaid with sun-kissed tits!

“I like to show off my body,” said Annabelle. That natural enjoyment and exhibitionism is picked up by the camera.

“It feels natural to be naked. I don’t feel like I need to hide my body in the corner. I was always pretty confident growing up. I’m pretty happy with my boobs. They’re big and manageable. I think the only downside is finding bras that fit, but I’ve been trying to find tops where I don’t have to wear bras, like tight tank tops instead of bras.”

Annabelle was athletic growing up.

“I was on the dance team. I danced throughout my younger years, and I was on the kick line, too. My boobs didn’t get in the way. I put two sports bras on so they were pretty strapped in. Again, I managed it. Never got a black eye or anything.

“I’ve always been able to manage my boobs. And I did gymnastics for a year, but it wasn’t my thing. I have the flexibility down, though. Moreso when I was younger, but I’m still pretty flexible. I can put my legs pretty far back. Not behind my head but pretty far back.”