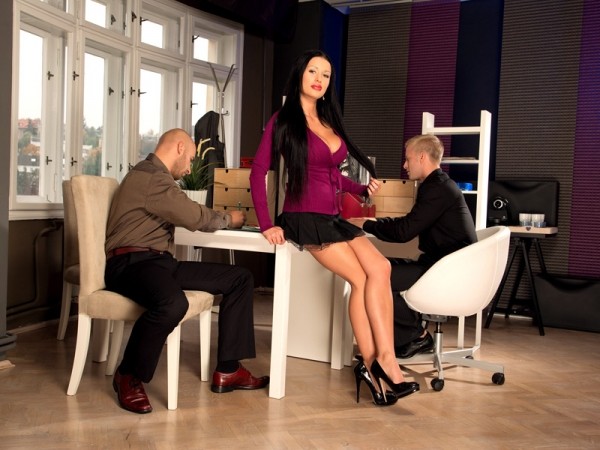 These number-crunchers are going to get no work done today. Nada. Zero. The only figures they will be examining will be Patty Michova‘s measurements. That low-cut and tight sweater and her micro-skirt have sealed that deal.

The trouble has already started because Patty has positioned herself between Neeo and Dennis and these two dudes are kidding themselves about finishing their assignments for the boss. And Patty knows it.

Neeo gets things moving on the right track by playing pencil games with Patty. Work is scattered to the side and both guys make a direct line for Patty’s big boobs, one man to a nipple.

Patty leans forward and takes Neeo’s shaft between her lips, sucking and jerking him. Behind her, Dennis has moved aside her legal briefs and is examining Patty’s ass and pussy. He spreads her ass cheeks apart and sticks his tongue deep inside her in-box.

Neeo has first tit-fucking honors. He begins by sliding his ruler between her cleavage and then has a sit-down with Patty. A sit-down on his cock. While fucking him on top, Patty can take dictation from Dennis, a gentleman who remains standing in the formidable presence of this office hottie.

Dennis has his turn next to drill Patty’s wet, tight slit. She leans forward and blows Neeo again as Dennis rams her good from behind. In the business world, this is called multi-tasking.

It’s good to see that there are still some dedicated business people hard at work.