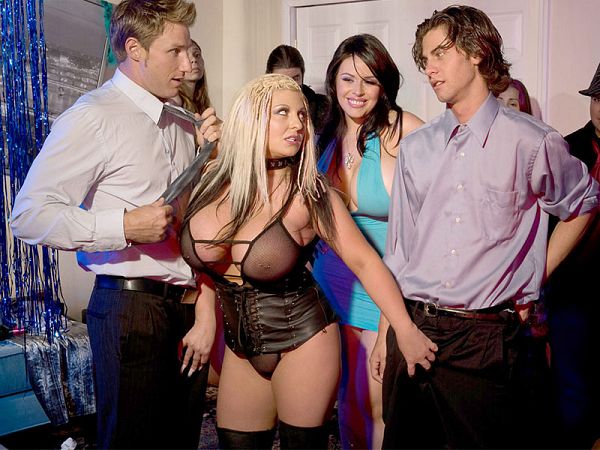 In the SCORE movie Boob Science, geeks Dexter and Sheldon have conjured up the superwoman Mandy in the privacy of their nerd bedroom by using their computer equipment and some magical a-bra-cada-bra.

Mandy has the power, so Dexter and Sheldon knock out the bullies easily. This impresses Angel, who gets wet over tough guys. Mandy says to Angel, “Hi, Angel. These are my wards, Dexter and Sheldon. They’re dying to fuck you.”

“I like men who know what they want,” Angel answers. “You could say the boys made me who I am today,” Mandy says. Now they’re a foursome and ready for a nasty, filthy, raunchy super-sex party. The four move over to the couch and the two super-bra-busters suck their dicks while the wasted party goers watch. The group stumbles off and the two lucky goofballs jam their stiff boners into Mandy and Angel, every which way but loose.