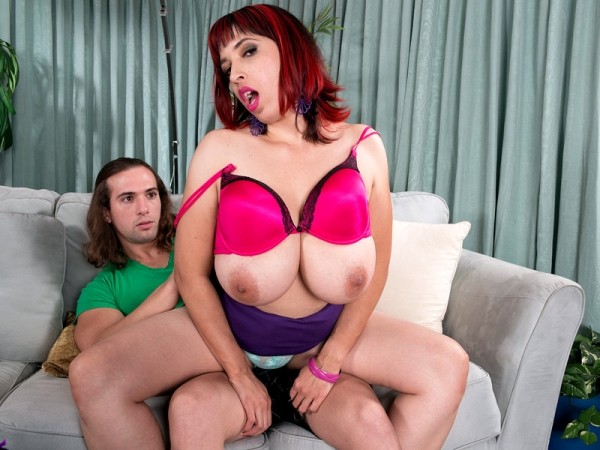 Elle Flynn has been shopping, a girl’s favorite sport, hobby and pastime. What has she caught, captured and brought back to Tarzan’s man-cave? Brassieres, of course! Elle is excited. “So beautiful, I had to buy them all,” says Elle. Let’s see her try some on. Her big, succulent, all-natural tits are waiting and so are we.

Elle wants to try on Tarzan’s favorite, the blue one, because she’s a pleaser and a giver with a whole lot to give. She can barely hold it up against her jugs because of his roaming hands that jiggle and shake he mounds. It’s a boob quake.

The blue one is a hit, but what Tarzan really wants is to suck Elle’s tits. Next up is the purple boulder holder. Once again, he dive bombs for her perky nipples. Then the pink one is given the shake test. Elle sucks her own nipples, wanting in on that action herself. With Elle is on the couch next to you, you don’t need cable TV, you play with her boobs all evening instead of a remote control.

Elle tries on one more bra, a striped number, but by this time, she’s all worked up and hot from all the breast play and she wants to play with Mr. Happy. She kisses the tip of it, then wraps her soft, squeezable flesh pillows around it and buffs it with fast strokes.

An Elle Flynn blow job follows and these are always super-horny and special at SCORELAND. Hands-free and with lots of spit, Elle gives him a tremendous blow job and ball sucking, her tits flying with his cock in her mouth. Wanting more, Elle gets on her back so Tarzan can fuck her tits and mouth.

“Fuck me,” Elle whispers. Tarzan rubs her clit with his fingers and, spreading her legs, slides past heaven’s gate so Elle can have her wish.