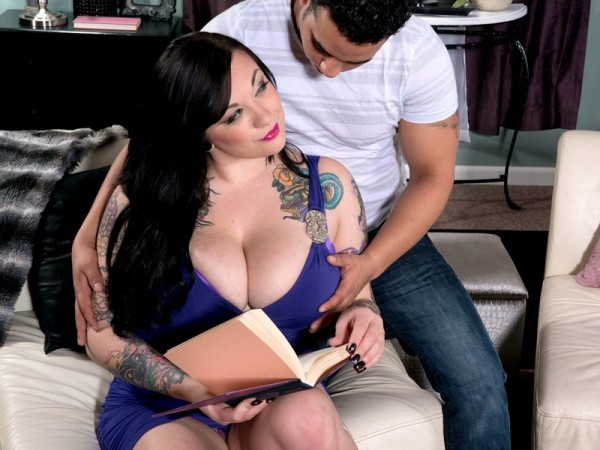 Rocky feasts on Scarlet’s tasty nipples, noisily slurping away. He and Scarlet make pleasure sounds. This is only the beginning. Rocky’s hand heads south to Scarlet’s waiting pussy. Slipping a finger inside her girl-hole, Rocky feels her wet candy-walls. He’ll swap his finger for his cock soon but first Scarlet must be fed hard prick. Kneeling as Rocky stands, Scarlet plays a tune on his skin-horn, then offers her cupped tits so he can fuck that sexy cleavage. Rocky wants more lip-service so Scarlet sucks him deeply and hands-free.

Now it’s time for their dirty ride. Rocky sits on the couch and Scarlet saddles up. Sitting on his stiffie, the brunette knockout rides the bologna pony, first with her back to him. Scarlet dismounts and gives his dick a quick suck before riding him again, this time with her huge naturals in his face. Scarlet wants a load of nut-extract inside her pussy this time, but their ride has a fun way to go before they arrive at cum-town!