Codi Vore: Once Upon A Time In The Breast

Codi Vore: Once Upon A Time In The Breast 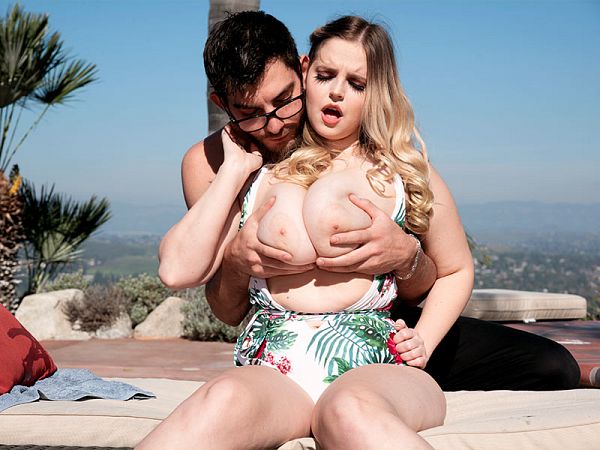 The California hills are alive with the sound of the wind and the sound of Codi Vore giving herself a hand at poolside. Codi takes her big boobs out of her swimsuit, giving her twin treasures some lovin’ squeezes and rubs. Watching her breast play will give you brain freeze. Codi puts some suntan lotion on, removes her suit and lies back on the lounger.

Codi’s me-time continues as she fingers her fuzzy cookie. Two fingers in deep, Codi’s reverie is interrupted by party-pooper Logan who sneaks behind her and splashes her with pool water. They race to the house for some skinny dippin’ without the water.

Once inside, Codi and Logan make time for breast play, licking, sucking and lots of hot tit-fucking. He lifts his cock to Codi’s mouth for her to suck on. This dude’s dick is so big, Codi can only get half in her mouth. Not getting enough of Codi’s spectacular hooters, Logan fucks her tits again.

The screaming starts as soon as Codi sits on his pole and continues as they fuck sideways, Codi on top pounding his face with her swinging boobs, and several other positions. One last plunge and bang into Codi from behind and then back between her breasts goes his cock.

Codi sandwiches it tightly as he looks at her beautiful face and drives his skin-bus through her titty-tunnel. Using her boobs alone, Codi makes him pop his nuts between her tits without him having to jack.

Another sensational scene by Codi Vore, V-mag Model of the Year.