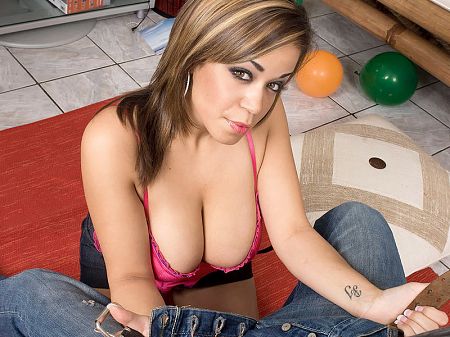 Chavon Taylor is annoyed that her boyfriend would rather spend time in front of the television watching sports than pay attention to her and tend to her needs. She complains that all he does is watch sports. Would he rather watch men in tight pants or would he rather feast his eyes on her soft curves and big tits?

His remote isn’t working and he thinks the TV’s broken until Chavon strolls into the living room with the TV’s cables in her hands. She disconnected his TV.

Chavon’s wearing a sexy top and skirt to whet his appetite. She kneels by him and drops her bustier-style top and proceeds to grip his dick and stroke it. Chavon stands up to do a striptease show, getting totally nude, and gives him an epic 15 minute tit-fuck and jerk-job while she talks dirty. That should keep him away from that nasty television.