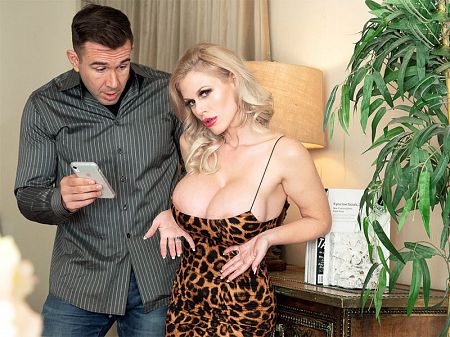 Casca Akashova and Will Pounder are at his place after their date. (Will and Sam Shock had the honor of double-penetrating Victoria Lobov.) Will’s eyes are locked on lovely Casca’s cleavage. He’s been switching his attention between her beautiful face and her big tits all night. She’s wearing a low-cut dress that leaves nothing to the imagination. Casca can read Will’s eye-language and can tell that he’s eager to get to know her a whole lot better. She enjoys teasing him.

Casca rubs her hands over his leg and Will makes his move on Casca’s big, high-riding tits. He loves the feel of her breasts in his hands and how they look. She covers his face with her boobs and that sends him into hooter heaven. They peel off their clothing faster than escape artists.

Will licks Casca’s shaved pussy, and when he’s done, she sucks and licks his cock. She lies back ready to get smashed. Will parts her shapely legs and shoehorns his dick into her pussy. She inspires him to get creative with positions. This after-date is working out just fine.