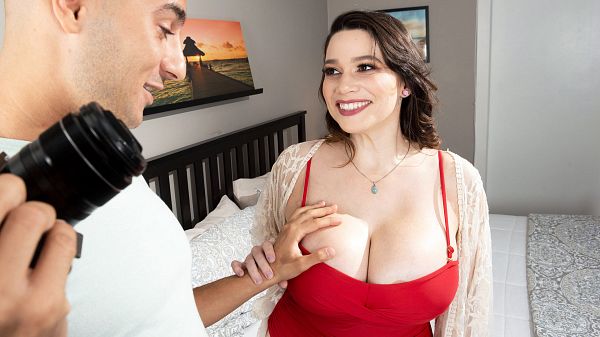 As the editors at The SCORE Group have emphasized before, the life of a SCORE magazine photographer is a difficult one. He must photograph sexy, naked stunners five days a week–or longer, if he is trapped on an island with them. He must describe what he wants these busty bombshells to do on-set during the shoots in very explicit language, comments that would in everyday life guarantee a slap across his face. His face is often within inches of their pussies, wet from the thrill of exposing themselves to a stranger. He often must wear steel-mesh underwear so the girls don’t spot the erections they are giving him. How they have the fortitude to drag themselves to work each day demonstrates their professionalism.

Now, here we have Milan, an excellent stud in front of the camera, but behind the camera photographing naked women with big tits, well, we’re not so sure. Some of us bet he would cave, especially when we found out that his model was going to be Brooklyn Springvalley. Brooklyn easily seduced him, fucked him several times with her eyes, and got him to put away his camera before she even took her tits out. She wanted his dick in her mouth and pussy ASAP and she wasn’t going to let him get away.