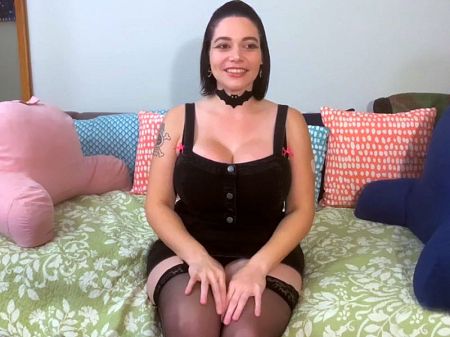 Brooklyn Springvalley and her guy were SCORE fans before she became a SCORE Girl herself. She has a giggly, cheery, fun-loving personality. Very similar to Brittany Elizabeth. For this video, Brooklyn wears a sexy black outfit that does her figure and her massive 34K-cup boobs justice. Black stockings, heels and a bra and panty set complete her busty centerfold look. She reveals her secret identity as Bat Girl of SCORELAND by the bat insignia on her neck. We knew she was a super-heroine who enjoys cosplaying.

Brooklyn chats about her background. She moved to Texas from New Jersey ten years ago. Brooklyn used to work in an office but shooting videos and photos and cosplaying was what she really wanted to do so she made that her goal. Answering questions about her huge tits, Brooklyn says that supersizing her breasts has increased her sex drive. She takes off her bra so she can jiggle and bounce her boobs and give her nipples a good sucking and licking.