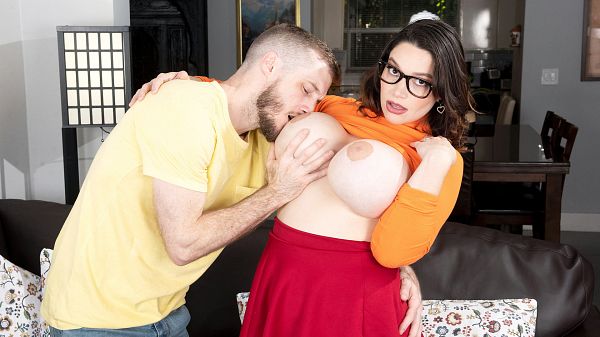 Brooklyn Springvalley is excited about tonight’s date with Brick Danger because they’re going to a cosplay party at a friend’s house. At these bashes, the girls recreate one of their favorite TV, movie, manga or anime characters and most of the guys wear a new T-shirt. Do you know who Brooklyn is going as? ‘Cause we’re not telling.

When Brick arrives to pick up Brooklyn, she invites him in for a quick drink before they take off. Brick is flustered, staring at how Brooklyn’s rack looks in her costume, especially up top.

They’re going to be a little late for the party because Brick has permission to touch Brooklyn’s huge tits, and once that starts, he advances to sucking her nipples and playing with her giant breasts. They get into kissing and making out passionately as they undress each other.

Brooklyn goes south on Brick’s cock, bending over him, and then she gets some throat fucking, her long tongue sticking out. Eager to fuck, Brooklyn sits on Brick’s pole and rides it cowgirl in both directions. That’s not enough for Brooklyn. She’s just getting warmed up. There’s still plenty of time to get to the party, so they keep fucking.