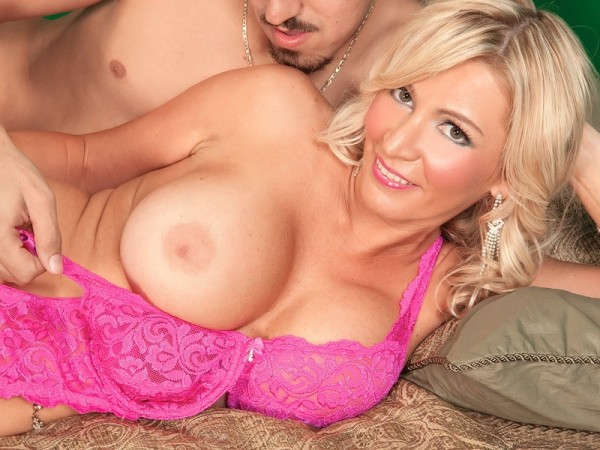 Ingrid Swenson is a SCORE Girl from Miami Beach. She holds a regular job. A slim and stacked blonde, Ingrid likes to spend time at the beach and beach clubs wearing skimpy bikinis that are too tight for her 34DD-cup tits. Ingrid is married to a SCORE reader who gave her permission to show off her body for our cameras. He also gave her permission to let other guys fuck her good and hard on-camera.

Years back, guys didn’t want to know the girls were married or had boyfriends but now there’s been a tidal shift in attitude by readers and video viewers.

Ingrid gets drilled and nutted, taking a cock-filling deep and fast in nasty positions. Being married to a SCORE fan raises the question of why be married if she’s going to get fucked by other guys, but the same question could be asked of swingers. The reason is that they want a stable, steady, non-monogamous relationship with a spouse and they crave the occasional new fuck partner for the thrill of it and the excitement of doing it on film for everyone to enjoy, just like married SCORE models Kelly Christiansen, Siri, Shelby Gibson, Jayden Prescott, Barbie Kelley and Sharon Pink.

And their husbands don’t mind. They like to see their SCORE brides injected with strange cock now and then. One was asked about that and his response was “Kicks.”