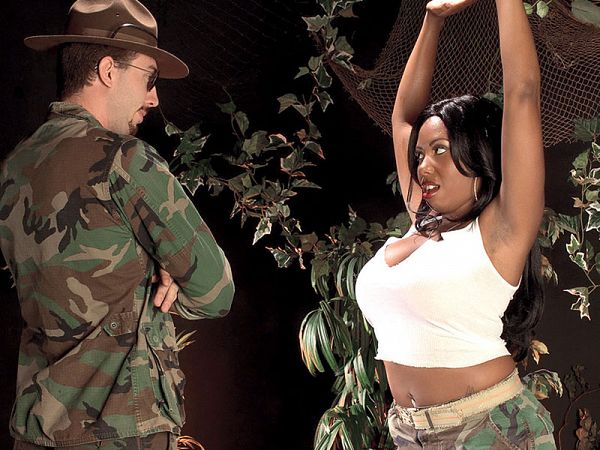 Never let it be said that SCORELAND does not honor the awesome accomplishments of military men and women here and abroad.

Army trainee Candace Von adds her own salute while we salute Candace in our own way. Reaching for her canteen, she pours the contents over her lovely, large tank-top missiles. Those deadly weapons are made of 100% natural ingredients. Is it a waste of resources to douse those babies in army water? Hardly. But we’ll let the no-bullshit drill instructor handle this situation. He’s sure to have Candace’s armaments well in hand and as soon as possible.

Ten jumping jacks to be sure. Candace gets his message as her luscious bazookas spill out from all that motion. But Candace is wearing a non-government-issued bra that’s discovered while she’s running in place. That’s sure to raise the sergeant’s ire as well as his pocket pistol. He doesn’t like that one bit so there’s only one thing to do. Make recruit Candace do topless push-ups over his face.

Is this in the handbook? Maybe not, but it’s in the Big-Boob Boot Camp manual (see page 23). Candace quickly learns that the best way to a tough drill instructor’s heart is to unzip his fly. They will now engage each other in a hand-to-hand encounter in positions not within Army guidelines. But sometimes, two soldiers have to improvise.

Even Candace herself starts barking orders in her demand for a hard bedroll. It’s a role reversal with a major explosion at the end as the sergeant nuts his trainee in a highly irregular procedure. Don’t ask, don’t tell. When training a recruit stacked like Candace Von, keep your head in her foxhole.