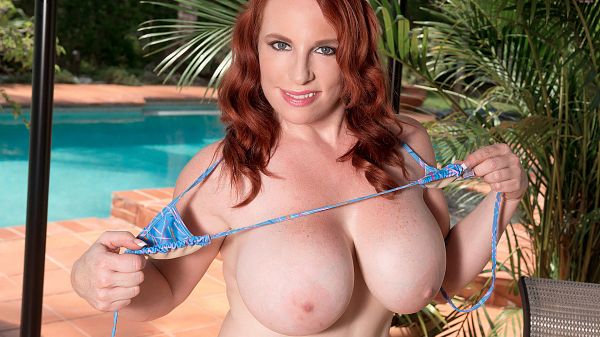 Red Vixen lotions up at poolside. She’s got to protect that pale, creamy-white skin from the sun. Red pulls aside her bikini top to lotion her big tits. They need loving care too. Going inside the house so any potential peepers lurking around can’t see what she’s doing, Red rubs in more than lotion and gives herself the full, hands-on treatment.

Red is a busty WILF. With her husband’s encouragement, Red and her hub live out their sex fantasies. She really enjoys modeling, starting off with lingerie, then eventually posing hotter and hotter over time. Red becoming a SCORE Girl was one of her husband’s fantasies and he encouraged her for a long time before she decided to give it a go. Then there’s their fantasy of Red having sex with other men on-cam.

“He’s the one who built up my confidence more and more. He brought out that sexy side. He made me see that I was sexy, that I wasn’t just an 18-year-old with boobs. I think it was then that I really blossomed the most, then one day he just started taking pictures of me, just sexy stuff. About 20 years ago. Clothes on. Then flashing, bare-breasted. He liked that kind of stuff, and then I started thinking, ‘Oh, I do look kinda good.’

“And I remember one day he asked me, ‘Have you ever thought about modeling.’ And I was like, ‘I’m not the kind who models,’ because you think of tall women…thin women. He was the one who told me about a modeling site, so I found it and opened an account and started doing more modeling with photographers in the area.”