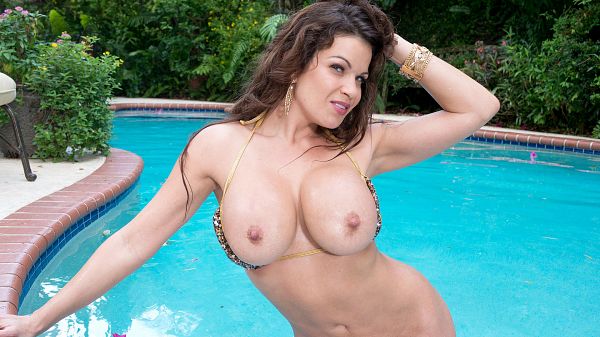 Jaded Dawn is a busy feature dancer traveling the club circuit of North America. Super-flexible Jaded has many titles to her name, among them Miss Nude World Hottest Body and Miss Nude Go-Go. Jaded’s also been a guest on the Jerry Springer TV show and on the Tony Batman internet radio talk show.

Jaded is from Des Moines, Iowa and lives in Las Vegas. She is an experienced belly dancer and likes to design stage costumes. Jaded has a body made for bikinis as this photo shoot and video prove.

Since Jaded’s a dancer, you could sit two feet away from her when she spreads her legs nice and wide on-stage the next time she’s at a club near you. It beats watching football.