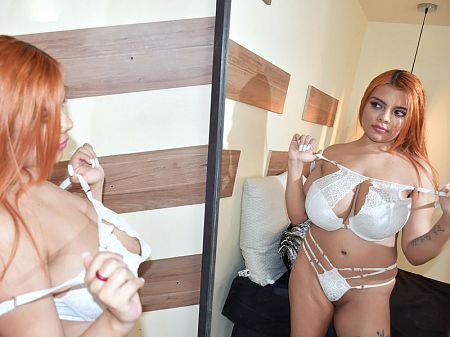 A stunner, Bhiankha examines her beautiful body in her full-length mirror. She holds up two string bikinis and says, “I have two beautiful, tiny bikinis. I think they will look good on me.”

Bhiankha’s second bikini is blue and only slightly larger than her green bikini. The bottom of this bikini covers her pussy a little bit more but not by much.

“It is play time!” Bhiankha tells us. The first ten minutes of this scene is hot. What will she do next? We can hardly wait.

Putting her bikinis to the side, Bhiankha gets into bed, and with her ass cheeks facing the camera, spreads them to show her pink pussy and her butthole. She turns around to swing and jiggle her big tits, bouncing on the bed to make them fly, does boob drops, claps them and sucks on her amazing nipples.

With a glass in one hand, Bhiankha begins to carefully milk her boobs and collect her nipple nectar. For those of you who are huge fans of lactating ladies, what Bhiankha does will drive you crazy, and that’s before she gives her lovely pussy some much-deserved attention.