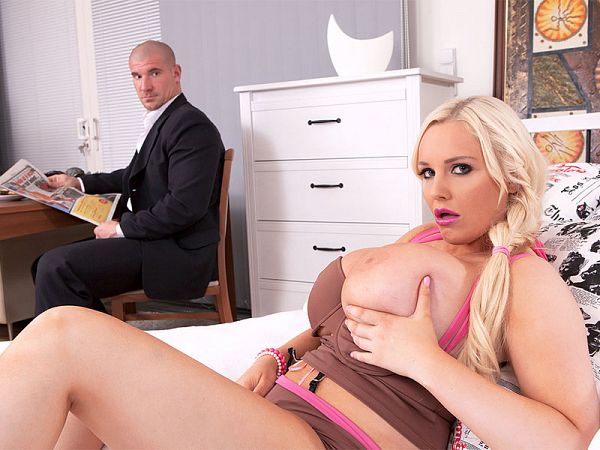 Jordan turns on her side and pulls her booty cheeks apart so he can see the butt-plug all the way inside her asshole. Don’t ya hate girls who play hard to get? Max is abrupt. “Maybe later.”

‘C’mon,” said Jordan, whipping the bed with her panties. “Come here.” Max gives in. In two seconds, Jordan is sucking his dick, making slurping and popping noises. She really loves dick in her mouth and between her tits. Jerking his shaft and licking his nut-sac, Jordan keeps repeating the word “fuck” and choking on cock.

Jordan gets on her back to get her tits fucked again and choke on his cock on the upstroke between her heavy jugs. She’s one hell of an assertive girl. Max has her get into a doggie position so he can finger-bang her pussy before he lays the pipe to her. “Fuck my ass,” Jordan pleads.

Max takes the butt-plug out of her ass and puts it in her mouth so she can taste her own ass juices. Jordan assumes the position again and Max pounds her pussy first then replaces the butt-plug with his meat-pipe to fuck the horniness out of her, at least for a while.