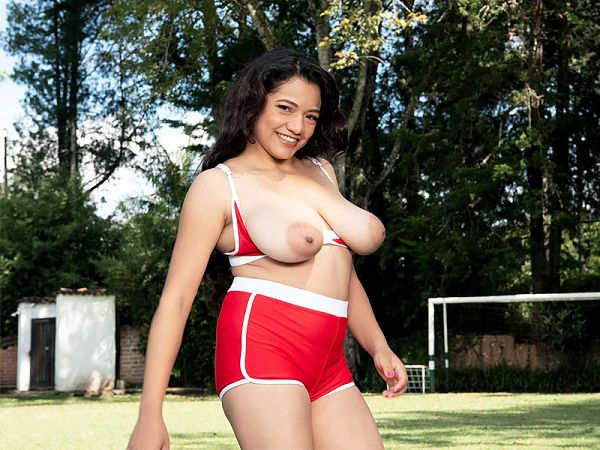 The Women’s World Cup was a TV ratings smash hit and might have drawn higher numbers. Had the Colombian team drafted Ana Montes, the course of history would have been changed. That’s our opinion and we’re sticking to it. She has some pretty big cups and large areolae to match. Unfortunately, Colombia didn’t qualify.

“The most-fun thing I’ve ever done is to be a webcam model,” said Ana. “Besides being fun, it has been very exciting and it has allowed me to explore my sexuality and femininity. It has allowed me to show the other side of me that I am not capable of showing normally.

“It has also helped me to be very uninhibited since I was a very introverted girl brought up in a Christian family in which any reference to sex is synonymous with sin. So away from the camera, I tend to be a good girl and in front of the camera I take advantage of it and take out my bad girl side.”

Here we have an action girl scene with energetic, exuberant Ana kicking a football, running around topless, big boobs flying in slow motion, jumping on a trampoline and taking a break to spank out a goal. Ana wins this period easily. Captioned in English.