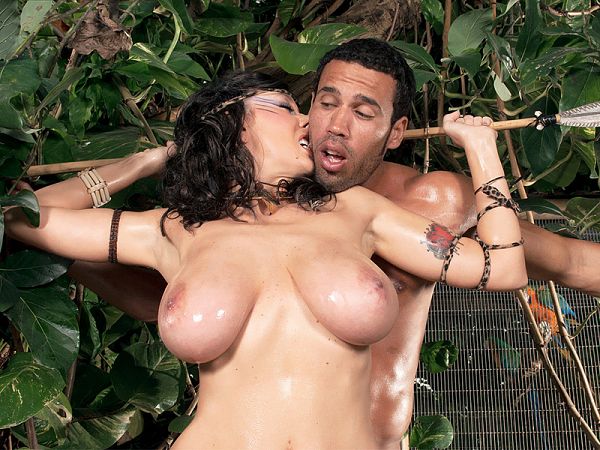 The Mamazons, a lost tribe of big-boobed jungle goddesses have captured four explorers and imprisoned them in a primitive cage. It looks like they’re not going to make it out in one piece, let alone get their hands on the Mamazons’ idol, a stone alleged to bless women with big tits.

Hugo is escorted out of the cage and brought to a hut where vicious queen Alexis and her followers, Rachel, Alia and Shyla, are waiting to inspect this alien creature known as “man.” The helpless Hugo is humiliated and tossed on the ground. Under the queen’s watchful gaze, the other Mamazons pull his pants down and inspect his banana. They’ve never seen this kind of appendage before and are more than curious about its purpose. What do men do with this? Queen Alexis seems to know. She tells them it’s for pleasuring women, a piece of information that intrigues this man-less settlement.

Alexis asks for the doctor to be brought to her for questioning and Alia is ordered to return Hugo to the cage, but she takes him instead to a secluded area away from the other Mamazons. Cutting his bonds, she trips him to the ground and jumps the surprised Hugo. Seeing cock for the first time has activated a basic instinct in Alia and now she wants as much jungle meat as she can get.